Skip to content Skip to main menu
Home › The Project

The 15cBOOKTRADE Project (ERC 2014-2019) is now completed, but research continues 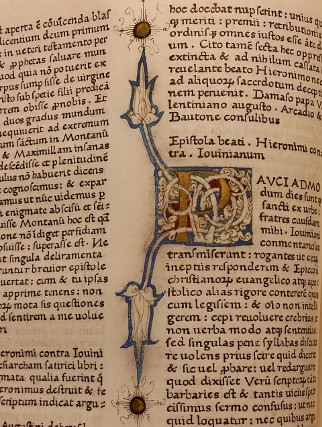 Books printed between 1450 (the year of Gutenberg’s invention of modern printing) and 1500 (conventional cut-off date in scholarship) are known as incunabula. Some 30,000 editions are known today, in some 450,000 surviving copies, located in about 4,000 different public libraries, mostly in Europe and North America.

Each surviving copy has a different history, which can be reconstructed with the help of physical evidence (ownership inscriptions, decoration, binding, coats of arms, manuscript annotations, stamps, prices, etc.) and bibliographical evidence (historic library catalogues, bookseller and auction catalogues, acquisition registers, etc.): all this is known as copy-specific information, or provenance, or material evidence, or post-production evidence.

The idea that underpins the 15cBOOKTRADE Project is to use the material evidence from these thousands of surviving books, as well as unique documentary evidence — the unpublished ledger of a Venetian bookseller in the 1480s which records the sale of 25,000 printed books with their prices — to address five fundamental questions relating to the introduction of printing in the West which have so far eluded scholarship, partly because of lack of evidence, partly because of the lack of effective tools to deal with existing evidence.

These five questions are:

1. Distribution, Use, and Reading Practices

The book trade differs from other trades operating in the medieval and early modern periods in that the goods traded survive in considerable numbers. Not only do they survive, but many of them bear stratified evidence of their history in the form of marks of ownership, prices, manuscript annotations, binding and decoration styles. The database Material Evidence in Incunabula (MEI), conceived by Cristina Dondi, developed by Alex Jahnke of Data Conversion Group, hosted and maintained by CERL (Consortium of European Research Libraries), gathers together this kind of evidence for thousands of surviving 15th-century printed books. For the first time, this makes it possible to track the circulation of books, their trade routes, national and international, and later collecting, across Europe and the USA, and throughout the centuries.

Former owners are identified as private or institutional, religious or lay, female or male, and by profession. Marginal manuscript annotations are quantified: occasional, a few, several, extensive – localised:  in the first part of the book, throughout –  and qualified: corrections, completions, supplements, extraction of key words, collation, translation, structuring the text, comments, censorship, reading marks, that is underlining and pointing hands, drawings, corrections/notes by the printer, lecture notes.

The Project is enabling a significant expansion and enhancement of the database MEI, by creating high quality descriptions of incunabula collections, book in hand, at the British Library and in Venice libraries, and by harvesting thousands of records presently scattered in hundreds of different libraries’ catalogues.

Groundbreaking new evidence for the history of the book trade in the 15th century is coming from the in-depth study of the manuscript Zornale or day-book of Francesco de Madiis (Venice, Biblioteca Nazionale Marciana, MS Ital. XI, 45 (7439)). It records the daily activity and sales of a Venetian bookshop from May 1484 to January 1488, as well as the inventory of the stock-in-trade for just over one year, to June 1485. In this period 11,100 entries with their prices are registered, involving 6,950 sales, sometimes gifts or barters, and over 25,000 copies. For its scale, for its detail, and for its importance as a fly-on-the-wall documentary of what happened in a Renaissance Venetian bookshop, the Zornale is unique. The detailed study of this exceptional document will finally bring to the attention of scholarship the economic aspects related to the introduction of printing in the West.

Cristina Dondi and Neil Harris, Professor of of Bibliography and Library Studies, University of Udine, are working at a transcription of the original document with an accompanying critical apparatus.

3. The transmission and dissemination of the texts incunabula contain

The Project has created the new database Text-inc, to research the corpus of all texts printed in the 15th century, modelled on the Bodleian’s Catalogue of Incunabula (Bod-inc).

Also, it is enabling the enhancement of the Incunabula Short Title Catalogue (ISTC) with the introduction of new research coordinates: lay/religious and subject categories applied to titles, time periods (Classical, Medieval, Humanist, Contemporary) applied to authors and anonymous works, a counter of copies.

4. The circulation and re-use of the illustrations

The Project is experimenting with the application to 15th-century illustration of image-matching software recently devised by the Department of Engineering Science at Oxford to detect the re-use and copying of 17th-century English Ballads held in the Bodleian Library.

Matilde Malaspina in Oxford works on capturing Venetian illustration, producing metadata, and testing an application which, if successful as hoped, could be extended to all 15th-century illustration.

The objective behind MEI has always been the visualization of the circulation of books and of the texts they contain, throughout Europe, and beyond.

Prof. Min Chen and Dr Simon Walton, of the Oxford e-Research department, are applying scientific visualisation techniques to MEI data, to represent, geographically and chronologically, the movement of 15th-century printed books and of the texts they contain.

What books were printed in Venice and exported, purchased, and used in Germany or Poland in the 15th century? Or printed in Nuremberg and used in Italy in the 16th century? — What kinds of books? And used by whom? How? — How much did early printed books cost? — Were there any female readers? And what kinds of books were purchased by students, lawyers or priests, in the 15th, 16th or later centuries, in Italy, France or anywhere else? — Which mathematical editions were acquired by religious institutions? Who was buying Ptolemy in the Renaissance? Who was collecting it in the 18th century? — Can we quantify the amount of 15th-century printed books that entered European and American collections as a direct consequence of the dissolution of religious institutions and their libraries in the 18th and 19th century? — How many times did Petrarch or Boccaccio appear in print in the 15th century? — What was the percentage of classical, medieval or contemporary texts being published in the first fifty years of printing? — Which works survive today in the largest number of copies? And in the smallest? — Who selected, edited and contributed to the production of a 15th-century edition? — Can we establish the transmission in print of the body of texts that have come down to us via the new medium? — Indeed, how many works were printed in the 15th century (or at least survive today) in single or multiple editions? How many editions contain illustration? Do we have benchmarks that can help us gauge the quality and the quantity of what we have lost over a 500-year period?

What all these questions have in common is that they are highly relevant to our understanding of the impact of the invention of printing on early-modern society, and that we cannot answer a single one of them.