Groundbreaking new evidence for the history of the book trade in the 15th century is coming out from the in-depth study of the manuscript Zornale or day-book of Francesco de Madiis. Discovered at the beginning of the 19th c., the Zornale (Venice, Biblioteca Nazionale Marciana, MS Ital. XI, 45 (7439)) records the daily activity and sales of a Venetian bookshop over three years, eight months, and one week, from 17 May 1484 to 23 January 1488, as well as the inventory of the stock-in-trade for just over one year, to June 1485. 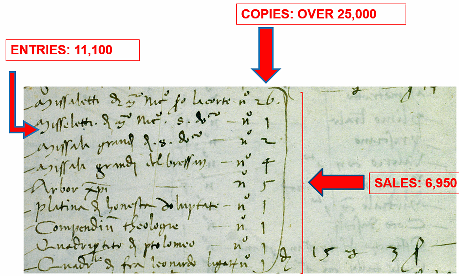 In this period 11,100 entries with their prices are registered, involving 6,950 sales, sometimes gifts or barters, and over 25,000 copies.

For its scale, for its detail, and for its importance as a fly-on-the-wall documentary of what happened in a Renaissance Venetian bookshop, the Zornale is unique. Other documentary evidence for the period is piecemeal and of varied nature, such as post-mortem inventories of bookshops and lawsuits that contain estimate of value, but not real prices.

Scholars have long shown an interest for the Zornale and for its significance as a record of the Renaissance book trade, beginning with the very partial transcription published by Horatio Brown in 1891 (Horatio F. Brown, The Venetian printing press 1469-1800. An historical study based upon documents for the most part hitherto unpublished, London, Nimmo, 1891, 234 entries out of 11,100 and the whole stock-in-trade). In more recent years Martin Lowry discussed the material in two well-known monographs, but his early death prevented any in-depth analysis (Martin Lowry, The world of Aldus Manutius. Business and scholarship in Renaissance Venice, Oxford, Blackwell, 1979, and Id., Nicholas Jenson and the rise of Venetian publishing in Renaissance Europe, Oxford, Blackwell, 1991). Its exploitation has had to overcome two principle challenges, the sheer extent of the document, 160 leaves in agenda format, and the very condensed nature of the entries, which require palaeographical and bibliographical expertise for their interpretation.

The detailed study of this exceptional document is finally bringing to the attention of scholarship the economic aspects related to the introduction of printing in the West. Scholars working on any area of classical through to early modern texts (from school and devotional books to legal, medical, theological, classical publications, etc.) will find here evidence of the sales records, hence the reception and market value, of works they are studying, which comes from a source both authoritative and representative, a major bookselling outlet in the heart of the most important printing city of the 15th c.

The critical apparatus of the edition of the ledger will address the following issues:

A second major source of pricing comes from the books themselves: prices and currencies, fundamentally important to the economic study of the book trade, are individually recorded in MEI to facilitate their retrieval for research. This will allow a critical mass of evidence to be effectively compared with the documentary evidence recorded in the Venetian ledger.

The PI and Neil Harris, Professor of Bibliography and Library Studies, University of Udine, are preparing a complete transcription of the original document with an accompanying critical apparatus.

An international conference on the trade and price of books in the Renaissance, in manuscript and in print, will be organised in 2018.

Cristina Dondi and Neil Harris, ‘Oil and Green Ginger. The Zornale of the Venetian Bookseller Francesco de Madiis, 1484-1488’, in Documenting the Early Modern Book World: Inventories and Catalogues in Manuscript and Print, Acts of the Third St Andrews Book Group Conference. 7–9 July 2011, edited by Natasha Constantinidou and Malcolm Walsby, Leiden, Brill, 2013, pp. 341-406 [it contains the transcription, analysis, and commentary of one month of the shop’s activity, June 1484, in order to demonstrate how we intend to publish the edition in its entirety].

Cristina Dondi and Neil Harris, ‘Best Selling Titles and Books of Hours in a Venetian Bookshop of the 1480s: the Zornale of Francesco de Madiis’, in La Bibliofilía, CXV, 2013, pp. 63-82.